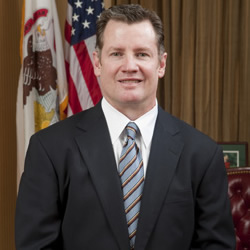 Bill Cadigan has worked for decades on Chicago’s North Shore as a taxpayer advocate and government reformer. Prior to his legal career, Cadigan served as an aide to former U.S. Rep. John Porter. In this role, Bill served as a liaison to local communities on flood control and shoreline erosion matters. Before entering private practice, Bill served as an Assistant State’s Attorney and in-house counsel for Metra, the commuter rail agency for northeastern Illinois.“I take pride in providing each client with personal attention and cost-efficient, results oriented legal counsel and advocacy”

He currently serves as Chairman of the State of Illinois Board of Elections. In the wake of Blagojevich scandals, Bill’s efforts to promote reform in state government was recognized in the report issued by the Illinois Reform Commission.

Bill has deep experience representing sellers and purchasers of commercial, industrial and residential real estate throughout the Chicago area. He has successfully represented property owners on tax appeal matters before the Cook County Assessor’s office, the Cook County Board of Review and the Illinois Property Tax Appeals Board.

“We get a great deal of professional satisfaction from working with property owners who share our belief that the Cook County property taxation process can be unfair sometimes needs to be challenged in an aggressive manner. Each appeal we prepare is based on accurate and timely evidence of a lower assessed valuation for the property and we have gotten great results for our clients.”

He is admitted to practice before the Illinois Supreme Court, the U.S. District Court for the Northern District of Illinois and the U.S. Court of Appeals for the Seventh Circuit.

Bill has competed in and finished 8 marathons, and in his spare time is an avid bicyclist in the northern suburbs.

He received a Bachelor of Arts degree from Eastern Illinois University and a Juris Doctorate from the John Marshall Law School.